admin
Cervical cancer is the most common cancer for women in Zambia, but national prevention programs indicate that eliminating the disease could become a reality.

Cervical cancer is almost entirely preventable and on the brink of elimination in some parts of the world, yet more than 50% of women who present with cervical cancer in Zambia have progressed to stage 4, the most advanced and final stage of cancer. These women are usually aged between 30 - 45 and considered to be in the prime of their life.

The HIV/AIDS epidemic in sub-Saharan Africa has also influenced cervical cancer incidence rate in Zambia. Women living with HIV are 5 - 7 times more likely to develop cancer of the cervix than HIV negative women. Even if a women takes her HIV medication accurately, she can still die from cervical cancer.

What’s more, sexual and reproductive health is not discussed openly in the region, which means some women are hesitant to present for cervical screenings.

In 2006, Zambia launched its prevention program with two clinics in the capital. This has since expanded to 160+ clinics across the country and more than 300,000 women are now screened for cervical cancer each year, often for the first time.

Zambia also commenced its HPV vaccination program in 2013. Between 2013 and 2016 more than 50,000 adolescent girls were immunised against the human papillomavirus that causes almost all cervical cancers.

This short film captures the steps Zambia is taking to educate men and women on cervical cancer prevention in both regional and urban populations.

The Conquering Cancer Campaign is a global communications initiative celebrating every effort to eliminate cervical cancer around the world. Because a woman’s chance of surviving cervical cancer shouldn’t depend on where she resides.

Join the Conquering Cancer Campaign today and help us show leaders everywhere that eliminating cervical cancer is an achievable goal in every country. 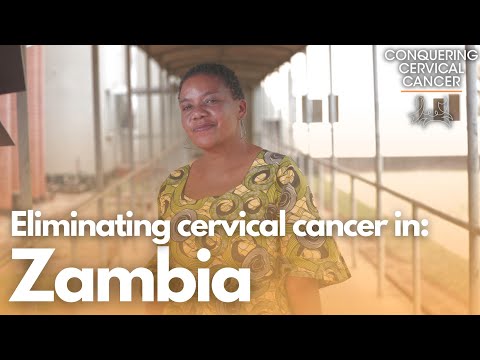 Cervical cancer is the most common cancer for women in Zambia, but national prevention programs indicate that eliminating the disease could become a r...